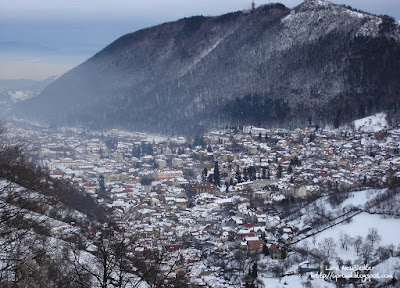 Brasov. Doesn't it look like out of our childhood fairytales?
Posted by Lara at 12:05 pm 5 comments: 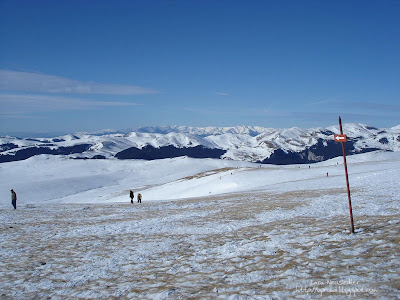 up from Sinaia, 2000 m in altitude, and still there was a springish air, and not too much snow either. nevertheless, it was good for the soul and eyes. i miss winter!
Posted by Lara at 7:50 am 2 comments: 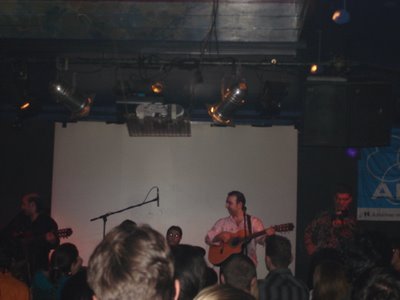 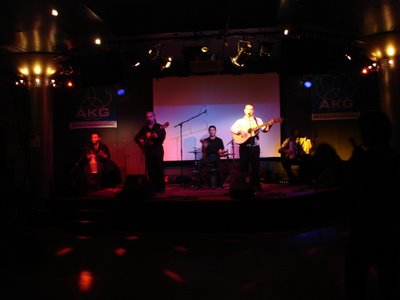 It's high time to humour Frau Novala and post a little something about the concert we attended in Wien. You can also read about Romano Drom here: http://sodazitron.blogger.de/20061230/.
So, it started kind of funny since one minute after we entered the room the band on the stage stopped playing. My friend was: "This must be the shortest concert I've ever attended! Sigh!". Anyways, we had a good laugh about that and waited - not really patiently - for the rest of the concert to start. Later we realized there was an opening act, some very Sarajevo music, as we dubbed it. Time enough not to pay too much attention - we were expecting Gipsy music, so I guess our stomachs/ears were not in the mood for anything else. When on the verge of getting upset, it started. At first everybody was a little bit shy, but up to the second song already, there were people dancing and jumping around.
This concert was indeed a model for the "beyond language communication", since the band talked to us in Romanes (or, as I stupidly called it, causing Frau Novala to smile, "Gipsy language"). One way or another, we completely understood everything. Their very faces, let alone the music, were talking. And the music... well, Frau Novala, back to your question: how can you describe music?! But one thing is certain: no need for translating the lirics, since the music took us from joy to sorrow, from love to lust to purity, from lonliness to the crowds. But I will stay with the joy, since it is a really long time since I've seen such sincere stage behaviour and uncanny "joie de vivre".
Danke sehr, Frau Novala, for making this possible!
Posted by Lara at 10:06 pm 3 comments: 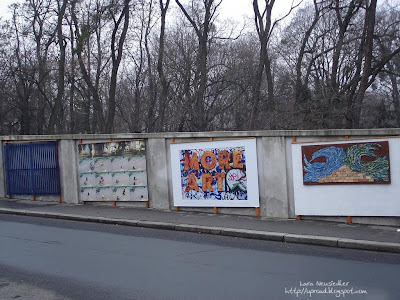 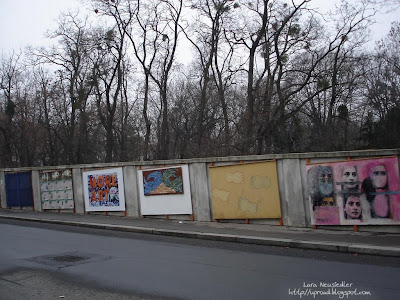 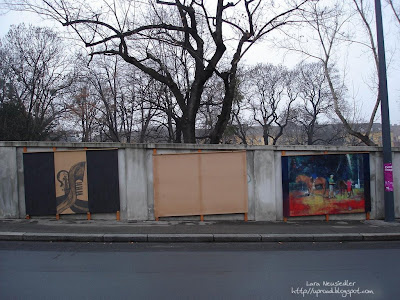 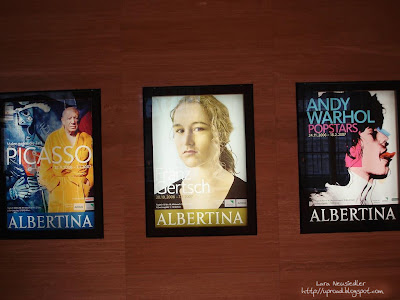 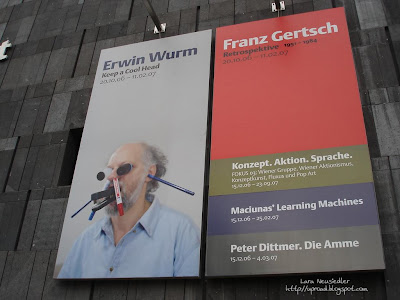 delight.
although I would like to say something about Picasso... but that would mean outraging the entire world :).
otherwise, I had real art-therapy in Wien: MUMOK (GO SEE ERWIN WURM!), Albertina, Belvedere... and many others I missed due to the lack of time.
Posted by Lara at 5:26 pm No comments: 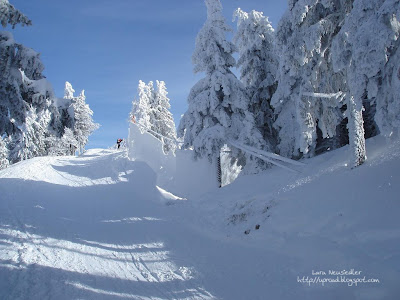 before going back to the Vienna photos, a little bit of snow from yesterday, up in the mountains. this is why it is so nice to celebrate Christmas twice: you have a second chance for snow :)!
Posted by Lara at 1:36 pm 2 comments: 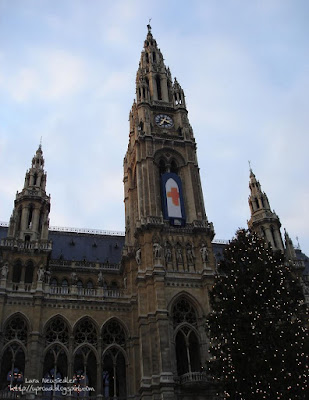 Merry Christmas for everybody celebrating it today (me included :) )!
This Christmas tree was in front of the Rathaus.
Posted by Lara at 7:21 am No comments: 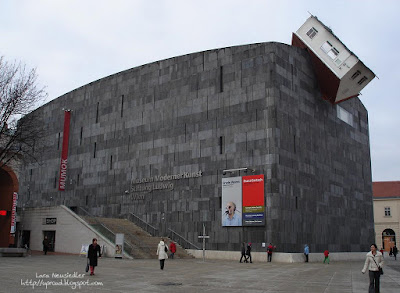 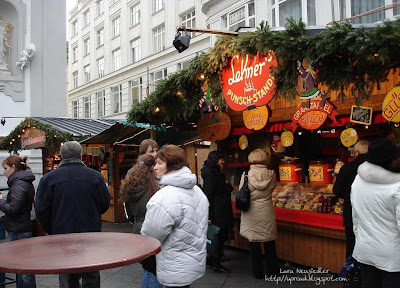 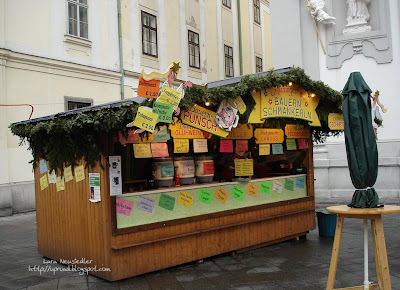 I was told, and they were right: if in Wien, the Punsch and the Würste are a must :)! never mentioning a thousand other delicacies...
Posted by Lara at 2:24 pm 1 comment: 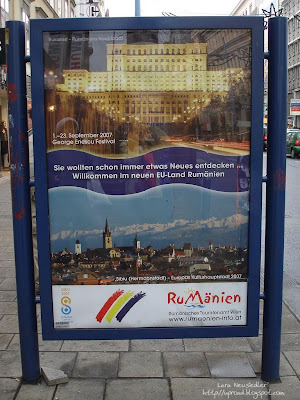 On my first day in Wien, I was shocked to see this poster. Followed by many many others... Let alone the fact that the city was practically invaded by Romanians...
Frau Novala, this is a reminder for you being invited to visit us!
Posted by Lara at 7:12 am 3 comments: 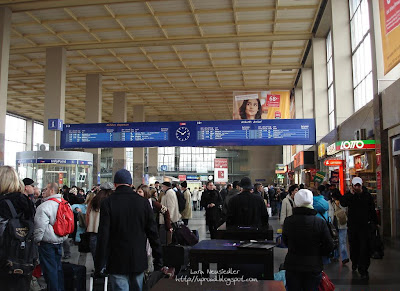 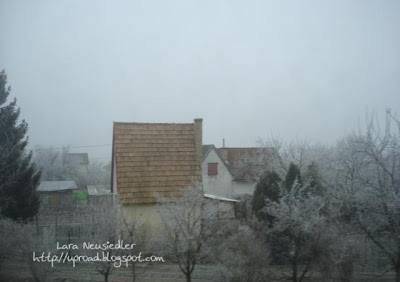 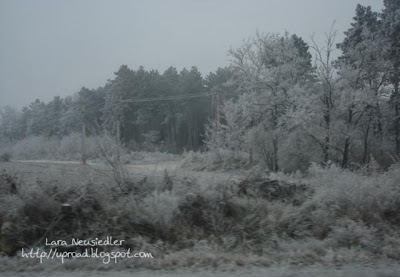 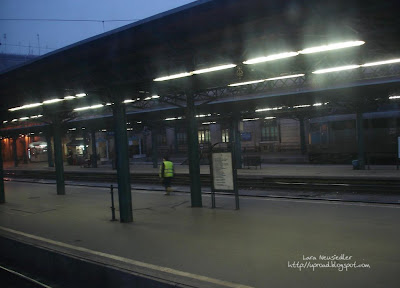 We were in Hungary for more than 12 h since the train had a HUGE delay (5 hours!!!). The only things I could spot thou were Budapest train station and some icy Hungarian landscapes (very beautiful with the white of snow). My best wishes to Z & Z, our fellow bloggers in Budapest.
Posted by Lara at 6:48 am No comments:

Wien: I was there, and it was GREAT!
special thanks goes to:
1. Frau Novala (http://sodazitron.blogger.de/), for being such a nice companion and for bringing Romano Drom to me
2. Annemarie and Johann Ribisch (http://members.aon.at/ribisch/) for being wonderful hosts - fellow bloggers, if in Wien, go stay there! Cheap accomodation, cosy environment, easy reach to center city by public transportation... simply great!
3. last but not least, to S., for joining me, in spite of all troubles.
Posted by Lara at 2:56 pm 4 comments: